The Bindlestiff's 19th Cabaret and the New Joints downtown

Whereupon, our carnie NY clan, The Bindlestiff Family Cirkus are celebrating 19 years of throwing shiny things in the air and actually catching them, putting other things down an esophaguses (esophagi?) like Tequila and swords, the feather and fringe and fishnet and pinstripe plaid serve as ceremonial garb.  The ritual: raunchy jokes, weird skills, and derring do, so stupid or unbelievable you laugh every time, Kinko's slow and steady gentleman hobo welcomes everyone with a tip of the hat, and Mr. Pennygaff will surely take over to win the race, despite his recently blotto'ed assistant, the Mistress of gams and hams, Philomena Bindlestiff.  Adam struts his hilariously awkward, birdlike self, and the acts all strut their stuff, new and classic.  Where we all came up and through and will always be true - they are still persevering in the challenge of bringing quality live variety entertainment with grace and edge to  modern Americans.  Nice stuff, folks.

It was also the first chance I've had to check out the new Slipper Room.  It was recently renovated from being epic-but-hole-sized Burlesque Bar, into a super-stylie, 1930's Parisian cabaret room with Art Nouveau balconies (and Fleur de Lis wallpaper and all the details deco'ed deliciously).  Too bad there weren't enough chairs on the ground floor to see the show from down there.  Seemed like logistics got the best of them as there was plenty of room, just no chairs.  The backstage is also laughable, but with great wallpaper, featuring one tiny dressingroom off the stage with a toilet in the corner.  Can you imagine the teams of feathered fillies and drag queens and acrobats and jugglers warming up and squeezing in for last looks in the one little mirror?  The decline of production numbers in variety shows these days comes as no surprise, lets just say.  Can't wait to work there myself sometime, soon I hope.  Looks like a fun stage to skate on, and the sound and lights were terrific with great staff, I hear.  I've been anticipating this reno from afar, so it was very satisfying to be so delighted with the outcome.  One word to performers - look up or die (your roots before) playing here.

We dropped in at the new Duane Park in the old Bowery Poetry Club space after the show.  Also incredibly chic with white stenciled walls, crystal chandeliers and the smell of great food.  A gentleman with a tight suit and a killer voice emcee'd the much larger (then their other Tribeca) space with authority and ease, with the feeling of a practiced talent show winner but sadly none of the edgy surprise of your more downtown denizen hosts.  He introduced the ladies with enthusiasm and class, though, which is more than can always be said of some of your sub-standard, downtown denizen hosts.  One after the next, very beautiful, very poised burlesque dancers glid gracefully down the stairs to the tiny (eventually hydrolically lifting!) side stage.  They stripped in their own glamorous ways and then the most unfortunate person in the club (with the prettiest smile), the "stage kitten" in the Swarovski G-string and silicon parts crawled around the stage picking up dropped dainties.  She is obviously lovely but I felt so bad for her.  Darl, crawling is no good for you.  Either bend over cause you want to give the folks a thrill, or get a long stick, and put your gum on the end of it to pick up Salome's dropped veils.  I hear they will have aerials within the week and if the inimitable Ekaterina has her way, the vibrant Georgian contorsionist/aerial artist will help orchestrate the novelty-actization of the apparently sometimes strictly Burlesque affair.  Whoever works there will have to be pretty strong to keep up with it all, and be heard or minded, over the din of heady late-night appetites.  I, for one, would love to sing with that band.  Hot and tight jazz, gentleman.  Taking a first class header down those stairs someday seems perhaps too obvious to avoid.  Again, I can hardly wait. 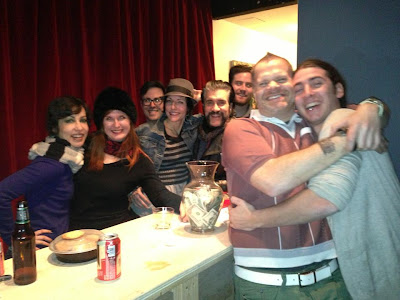 The third exciting opening of the week was Stephen Michael Rondel's (Director of the former Children's Aid Society New Acting School and Sullivan St. family theatre company)  Celebration of Whimsy (aka The COW).  They just moved in, taking over the space from The Living Theatre who had been occupying for 6 years.  In the large basement space, the stage is large and reminiscent of the old PS122 (though not as wide or well funded) with industrial pillars cornering the playing space.  The bar will have a beer and wine license within the week, and the backstage is perfect: roomy and equipped with large desks, racks, mirrors.  Eventually they'll be fully moved in, starting classes for kids and adults, with all their production costumes put away, and the small room in the back will be made available for rehearsals or further storage.  The swirl of thespians getting all jazzed about their next opus in this accessible and exciting new venue feels good for the soul.  Rondel's monthly new works showcase is Muffins in the Window, celebrating 6 years of artists and audience together facing the giddy challenge of the new.  First Thursdays for the next 10 years, God-particle willing.  Congratulations, Stephen and Tyler and Greg and you all, on your new lease on life - you COW.  Moooo.

All in all, as I take in the state of the arts in NY, where my fellow freaks and fabulosities have been holding court in all the time I'm out there on the road, I'm impressed, thrilled, jealous, heartened by old friends and eager to join back in the fun of all the glitter, sweat, and tears that is the NY Downtown Variety scene.  If only I didn't keep running off...

Email ThisBlogThis!Share to TwitterShare to FacebookShare to Pinterest
Labels: Circus, NYC Scene, Stages I Have Loved